It has been several years now since Sindyanna of Galilee started collaborating with Asako Ito from Tokyo and supplying her with custom order baskets from the basket workshop in our center in Kufr Manda. This collaboration creates fair employment for the women of the workshop and to me, watching them diligently craft each basket that will later be sent off to far away Japan, is a heartwarming sight. It turns out that a common thread can unite people situated even at that great a distance. 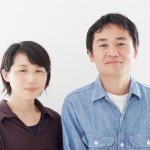 Each order consists of around twenty five baskets, and is completed by several women working together, and learning from each other in the process. The fabrication process and quality control is overseen by Wahiba Hujirat, the most veteran of the weavers and the workshop teacher. As time goes by, the women gain more and more weaving expertise, and each order shipped to Japan is of a higher quality than the one preceding it.

Every new order of baskets that comes in is greeted with excitement. Following the most recent order I decided to commit the story behind the collaboration between Sindyanna of Galilee, operating in an Arab village in the Galilee, and the Web-shop “Kagoamidori” based in Tokyo.

In 2010, Asako Ito, together with her husband Yoshiro Ito, opened the basket web shop “Kagoamidori”, whose name in Japanese means “the weaving bird”. Kagoamidori is an online web store dedicated entirely to the art of basket weaving, and serving primarily the Japanese public who are great supporters of traditional design and handicrafts.

Asako works with basket weavers from all over the world and has created a large variety of baskets and woven goods for her clientele. The store sells baskets from European countries: Sweden, Estonia, Russia; African countries: Kenya, Burkina Faso, Madagascar, Morocco; and Asian countries: East Timor, the Philippines, and Israel.

Asako’s “obsession” with baskets developed naturally out of her interest in traditional craft. It was then that she discovered a profusion of basket makers, each one with their own fascinating story behind their craft. With time she also began to want to expose the Japanese consumer to the variety of shapes and materials that are characteristic of this craft.

Asako ordered her first Sindyanna baskets through her friend Mayo Minagawa, from Sendai. As you may recall, Sendai was one of the towns that were badly damaged by the earthquake and the large tsunami last year. Mayo is the founder and the living spirit of the solidarity organization “Palestine Olive”, one of the first customers of Sindyanna of Galilee, importing fair trade goods from Israel and Palestine to the Japanese market. Asako used to purchase olive oil, soaps, spices, and other Sindyanna fair trade goods through Mayo. Through her connections with Mayo, Asako became aware of Sindyanna’s other activities, which include the promotion of employment opportunities for Arab women, and the establishment of a basket weaving workshop and a visitors’ center run by the women.

I asked Asako, what do you like in our baskets?

Asako: I like that the baskets are environmentally friendly, they come from the environment and one day they will return to it… they are made of a material that is flexible and allows for change and design, a special material, that unlike industrial materials only gets visually better with time. Moreover, you can make them in an unlimited variety of shapes and designs, according to the weaver’s personality, and the materials and techniques she works with.

What is the vision behind your store?

Asako: We want to be the best “story tellers” of the background from which the baskets emerge. We want to explain to the Japanese people how you can use them in modern life. This is why we intend to continue to support basket weaving initiatives that are mostly there to encourage and support fair employment and an honorable way to make a living for women. We strive to strengthen people’s bonds to artisanal craft, as an alternative to the overuse of industrialized and lifeless products…

Asako has been working with Sindyanna for about two years. The baskets she orders incorporate Palm Fronds, olive and terebinth branches that embody some of the local landscape of the Galilee.

One of Asako’s clients, after buying a basket, said: “This basket simply called to me out of its box, it was so beautiful, especially after I heard the story of the women who wove it. I would be happy to use it for a very long time and I will take good care of it!”