First Anniversary – Just one year after the project was launched, the olive saplings planted by Sindyanna in partnership with Al-Juzur have taken root and are thriving against all odds. In what was fallow land covered with stones and thorns, without any tracks or infrastructure, a modern organic olive plantation is growing over an area of 10 hectares – one of the few such plantations in Arab agriculture in Israel, if not the only one. (Read the full story)

Second Anniversary – In April 2012, we celebrated the Roha organic olive plantation’s second birthday. On Land Day, more than 100 friends of Sindyanna came to Wadi Ara’s fertile lands, Arabs and Jews including Ma’an agricultural workers from the surrounding villages, students, youth for social change, members of Beit Haam from Tel Aviv and more. Everyone pitched in, tilled and weeded the ground, planted and trimmed, and had a great meal after all their hard work. Sindyanna of Galilee promotes Arab agriculture and creates jobs for Arab women – we don’t just talk about it, we do it!

First Harvest – On October 20, 2012, dozens of volunteers, Jewish and Arab, from Tel-Aviv, Jaffa, Haifa nad Nazareth arrived to take part in the first harvest at Sindyanna of Galilee’s organic olive grove. The grove is the first multicultural plantation in Israel, promoting fair trade and Arab-Jewish solidarity. (Read the full story)

Third Anniversary – About 100 Arab and Jewish volunteers came from all across the country to celebrate the third anniversary of our organic olive grove in Roha on Saturday, April 13th. The volunteers weeded the trees and afterwards gather together for a meal provided by the Wadi Ara members of Maan. At the end of the meal there was a workshop centered around getting to know the area, its human and natural environment. (Read the full story)

Save Oasis, our Arab-Jewish Fair Trade Olive Grove – On May 9, 2014 we held a protest rally at Oasis to prevent the placement of high tension electric cables over our Arab-Jewish organic olive grove in Roha, as well as over other agricultural lands in the area (read more).

Implementing organic pest control – Dr. Yizhar Tugendhaft, Training Director at the Israel Bio-Organic Agriculture Association (IBOAA), trained our team on organic methods of pest control. Volunteers later helped set up biological control traps for the olive fruit flies that can damage our trees. These traps are completely organic and environmentally friendly and are an excellent substitute for the poisonous insecticide sprays that are typically used in agricultural fields.We also placed cages to host barn owls that can protect our groves from rodents.
. 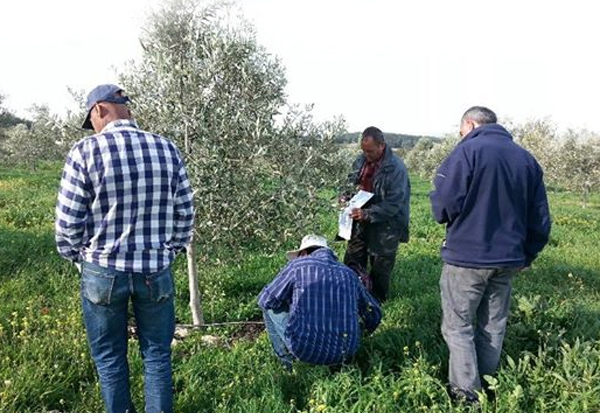 Olive Harvest 2015 – On Saturday, November 7 2015 Sindyanna held its annual volunteer olive harvest dedicated to promoting Jewish-Arab cooperation. Five years ago, we planted a grove of thousands of olive trees on the Roha land near Arara. The olives have become a source of high-quality organic olive oil, sold around the world as well as at the Sindyanna of Galilee visitors center in Kufr Kana, and in Tel Aviv.